This story of Zi’ Ciccio (Uncle Francesco) is about the hard times in Paduli right after the end of the Second World War.  It is from the collection of stories gathered into the book Le Tradizioni di Paduli: Storie Padulesi raccolte da Giovanni Saccone (the traditions of Paduli: Padulesi stories told by Giovanni Saccone), 2004. Hunger and cold were common.  People made do with what they could.  Hunger is a great motivator. 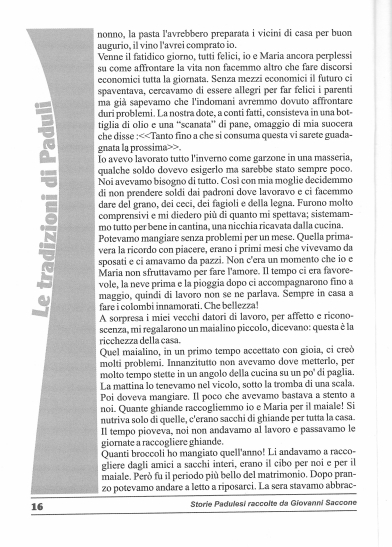 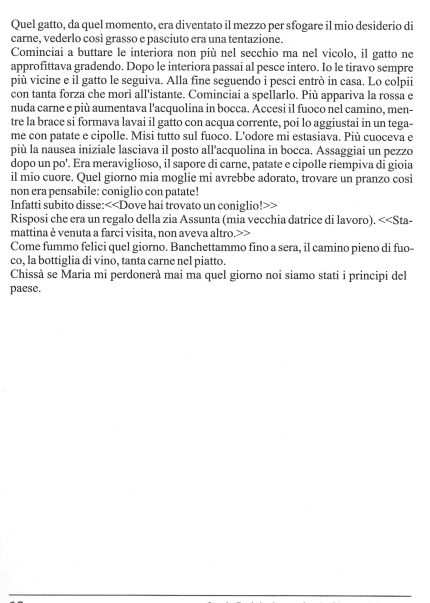 The war had just ended. In our town we only saw a small part of it. I recall the bombardment of Benevento. It was a sad week. Every night we heard the sirens announcing the arrival of the bombers. I remember that they usually came at suppertime. With our plates in hand we hurried under a huge oak tree. It’s still there if you want to see it, over near the Trombetti property. It is the biggest one. I and my companions under the boughs would hear the planes shooting at and bombing the Benevento train station. The explosions appeared like so many lights. The next morning we would go to clear out the rubble, all volunteers. How many persons I saw there acting like jackals! They robbed everything that had any value.

I recall one morning that my squad took advantage of the situation. There was a case of canned peas from America. We were so hungry that we hid them for our lunch and when it was noontime we separated ourselves off behind some rubble. We brought out the case of peas and opened each can with the point of a pick. What a surprise awaited us. Forgetting all about etiquette we opened each can and discovered the same thing in each one: tomato sauce.

We had planned a great lunch, but instead we ended up staying hungry. We couldn’t speak of anything else that day, each one of us cursing our bad luck.

I am telling you how misery was my constant companion in life. When I could have enjoyed life, life never offered my anything but hardships and sacrifice.

At the time I was already engaged to Maria (my future wife). We had already been a couple for quite some time and we had decided to marry in the spring. We organized everything including a house, two rented rooms and a meal with our relatives. My grandfather gave us two lambs. To celebrate us, our neighbors prepared the food, and I bought the wine.

The appointed day arrived. We all were happy. Maria and I were still wondering how we would deal with life when the only thing we could talk about every day was money. Without economic means the future scared us. We tried to be happy for the sake of our relatives, but we knew that in the following days we would have to face some hard problems. Our gifts consisted in fact of a bottle of oil and a “scanata” [loaf] of bread, thanks to my mother-in-law who said: “By the time you’ve finished this, you’ll have earned the next.”

I worked the whole winter as a farmhand in order to earn what money we needed, but it was always very little. We needed everything. For this reason my wife and I decided not to take money accept money for our work from our bosses, but rather grain, chick peas, beans and some wood. They were very comprehensive, and they gave me more than I expected. We arranged everything for good in the cantina, a niche cut out from the kitchen. We were able to eat without a problem for a month. I recall that spring with pleasure because it was our first time to live together as spouses and we made love like fools. There wasn’t an opportunity that Maria and I let pass without making love. The weather cooperated. First came the snow, followed by the rains which lasted until May. Therefore, we did not even speak about working. We were forever in the house like two love birds. What pleasure!

As a surprise, my aged employers, from kindness and gratitude, gave us a piglet telling us: “This will be a bounty to your house.”

That piglet, accepted at first with joy, created many problems for us. Above all, we had no place to put him, so for a long time he stayed in a corner of the kitchen on some straw. In the mornings I would take him out to the ally to the space under the stairs. Then he had to eat. What little we had was not even quite enough for ourselves. Maria and I collected so many acorns for him. He existed only on these. There were sacks of acorns all over the house. It kept raining, so Maria and I spent our time collecting acorns.

I ate so much broccoli that year! We would go to friends to gather whole sacks of it. It served as food both for us and for the pig. And yet, it was the best time of our marriage. After lunch we were able to retire to our bed for a rest. At night we embraced by the fireside without any worry about having to get up early the next morning to go to work.

The bad weather stopped and the work began. My wife and I didn’t miss a day of work. That year I had to be apart from her for about a month. For the whole month of July I stayed out in the countryside for the harvest. They gave me one lira a day – thirty days, thirty lire. I understood that it was hard but then I could be secure economically together with my wife at home. My money and hers gave us both a bit of security. We replenished our pantry with the necessary goods: the grain, beans, and wood. We did not fear for the coming winter.

Finally, the pig was fully grown, a real bad character. After one year he weighed more or less one quintal [220 lbs.]. The poor fellow ate only “cerze” (acorns). Come January we slaughtered him and made some sausages, some pancetta, and a bit of lard – all those things necessary for survival. But it was very little. We even preserved the bones to be used in making ragu on Sundays. To make a story short, a pig of 100 kilos [220 lbs.] had to serve us for a whole year.

We had enough to live on but we were not allowed to waste anything. We arrived at a point of even having to save on heating in the sense that we used the fireplace both to warm ourselves and to prepare the food, cooking a pot full of beans that would have to last us for a week. Then we would collect the hot embers from the fireplace and put them in a bucket under the table where we would sit for hours holding hands. When the fire went out we would go to bed. We would sleep partially dressed. You cannot imagine how cold it was in our house. It was probably the same in other houses.

Even with all that misery, I do recall an enjoyable event. I really wanted to have a real meal, especially meat, which I hadn’t eaten since the day of our marriage. I used to dream at night of a nice “round of meat and potatoes.”   The occasion presented itself one rainy day. My wife had gone to her mother’s house to her make bread. I went out into the town and bought a quarter kilo of fresh sardines (250 grams or ca. ½ lb.), all in all about a dozen of them that I would fry. But now comes the good part. While I was cleaning them at the door of the house, the Abbot’s cat came meowing up to me, looking more like a lamb than a cat as he weighed about five kilograms. I cleaned the few sardines, and he tried to steal one from me and between a tug here and a tug there it occurred to me that “If I catch him, we can eat for two days.”

I tried catching him but he escaped. Then I decided: “Now I will sacrifice the sardines so that tomorrow we can gorge ourselves on meat!” At that moment, that cat became the means of satisfying my desire for meat. Seeing him so fat and well-fed was a great temptation.

I began by spreading around the innards of the fish not into the bucket but in the ally which the cat enjoyed. After spreading the innards, I then took out an entire fish. I would tempt him to come closer and the cat would follow. Finally, following the fish he entered the house. I hit him with such force that he was killed instantly. I began to skin him. The more I uncovered the red meat, the more I salivated. I lit the fire in the fireplace and while the embers grew hot, I washed the cat with water and placed him into a pot with potatoes and onions. I placed the pot into the fire. The aroma made me ecstatic. The more it cooked, the more my initial nausea disappeared and left me salivating. After a while I tasted a piece. It was marvelous. The taste of meat, potatoes and onions filled my heart with joy. That day my wife adored me when she found such an unimaginable meal awaiting her: rabbit and potatoes!

In fact she immediately said: “Where did you get a rabbit?”

I answered her that it was a gift from Zia Assunta (my aged boss). “This morning she came by for a visit and that’s all there was to it.”

How happy we were that day. We feasted until evening, the fireplace full of fire, a bottle of wine, and lots of meat on our plates.

Who knows whether Maria will ever forgive me, but for that day we were the princes of the town.

This entry was posted in Stories from Old Paduli.