Stories of Old Paduli: I Fornai /The Bakers (Zi’ Carlo)

This is the third Story from Old Paduli to be appear in this Blog.  The first was Blogpost 3, “The Shoemaker / Il Calozolaio” in Blogpost 3.  The second was “L’ambulante / The Peddler” in Blogpost 7.  As with the previous two stories, this one also was recounted by Giovanni Saccone and translated into Italian by Maurizio Luongo.  It appears in the book Le tradizioni di Paduli: Storie Padulesi raccolta da Giovanni Saccone, Parte prima, Forum Giovanile Paduli, Finito di stampare agosto 2004, graffiti d F. Antonio Cavotta, S.S. 90 Bis, Paduli(BN).

“The Bakers / I Fornai” takes place in the early 1940s when the narrator, Zi’ Carlo, was around 14 years old.  The story focuses on how a family that loses its father, with no other means to live, builds an oven to bake bread and thus supports itself.  “Oven” (forno) in Paduli usually refers to a rather large, wood burning structure of bricks and mortar often built outdoors and used primarily for baking bread and pizza.

Below in order appear the English translation and the original text in Italian.

It probably was around 1940 because I was then about fourteen years old or a little more. My father, God rest his soul, had not yet returned from America. He had left for America just after the war of 1915-18. He went in search of fortune across the sea where he worked at the most difficult jobs in order to attain some economic stability. He worked for the railroad carrying wooden railroad ties on his shoulders that were used to support the rails. He then worked as a mason when the Americans began to abandon their wooden homes for ones made of stone. Finally, with Italian ingenuity, when the Americans had their beautiful houses, he ended up being their gardener.

In the meanwhile, he was married by proxy to my mother, Caterina, in 1924. He met his wife for the first time when he came back, and I (Carlo) was born a year later.

My mother used to say that they had a great feast. My father, Giovanni, had “i dollari” (dollars). He built a house in town and bought a piece of land. Three months later he departed once more. My mother stayed back in Paduli crying, pregnant, yet comfortable. She was envied by friends and relatives because she didn’t have to work as my father sent home “i dollari” every month.

However, she was used to working as she had grown up in the countryside; so she busied herself in a thousand different things: most of all in cultivating the land.  She started a garden, and for this reason we hardly had to buy anything. With the savings she made, she built a large oven for the sake of convenience. You see, before this, my grandmother had made the bread in the countryside, in winter, and there was no means of transportation. So having an oven would bring us good fortune.

I was born in January 1926. As soon as my father received the news, he informed us that he would be coming home for Easter. Everyone in town could talk of nothing else. “The American is coming!”

Easter arrived and so did my father bearing gifts for all the relatives as well as some new American gadgets that were inconceivable to the minds of us Padulesi given the circumstances at the time. In particular, the electric torch [flash light] impressed everyone. We still didn’t have electricity, and no one understood how this metal container could emit light. He also brought back a rifle and went out hunting, something previously reserved for the nobility. All of our relatives were very proud.

Before returning to America, he bought a bicycle for my uncle, my mother’s youngest brother, on the condition that he stop by the house everyday to see if we needed anything. My uncle kept his promise.

Subsequently, and in the same manner, my siblings Giovanni, Pietro, Nicola and Concetta were born. Then came the brutal news. My father was dead at the age of 40, killed by a women with a knife.

This sent my mother into depression, not only because she had lost the father of her children, but also because she could not resign herself that her husband had been together with another woman.

A number of years passed like this, senseless, vegetating. I recall my mother crying all the time. Then “i dollari” ended and we had to roll up our sleeves again. We had gone from the stars to the stalls. We had a house and a piece of land, but no money. Our relatives were all busy making ends meet, so they had little time left for us. The war was at its height, and you could reach out and touch the misery with your hands. Although we still had something to eat, we began to lack everything else.

Then, at my insistence, seeing that I was the oldest, we decided to remove ourselves from this absurd situation. We had to move forward by whatever means we could, especially for Concetta’s sake. She was the smallest, and we all adored her. She must live like a queen. She must always be “the daughter of the American”. That’s when the oven became our greatest treasure. In our town, it was a valuable thing to have as no one else had one.

The project was very simple. As everyone in town was a “day worker” (giornaliero) they found it difficult to have time for making bread. There were no stores selling bread. Thus, in view of the fact that everyone had to go to work early in the morning and returned in the evening, we, for pay, would bake bread for them.

Thus we began our business as bakers. Our fellow townsmen would bring in their “scanate” (dialect for loaves/pagnotte) for us to bake, and we would do the rest. When someone didn’t have time to prepare the dough, they would bring us their flour and return later to pick up the bread to last them for the whole week.

Saying it like this makes it seem easy, but in fact it was very hard work. I and my brother had to procure the wood to heat up the oven. We would get up at 4 in the morning, go to the forest and gather wood.   We needed twenty bundles of wood a day, so we would spend the whole day shuttling between the forest and the town with enormous bundles of wood on our shoulders.

In the beginning, everything went well, but then, possibly out of jealousy, problems began with the forest guardians because we were not supposed to gather wood from the communal forest. They would post themselves in the forest and wait for us on the road. We could not afford to be fined. So, we began to work at night by the light of the moon. How many times we fell down with those huge bundles of wood on our shoulders!

My mother would be working at the oven, putting in the bread and dividing the loaves by families, all for one “soldo” (about 5 cents) a loaf. After a while my mother became passionate about her work, not as a merchant but as a mother. Every bake was hers, and no errors were allowed. A burning oven would signify the end of a week of work for a family.

As I mentioned earlier, all of our fellow townsmen were manual laborers, and when they started their day’s work in the fields it was always as “day laborers.” So, they would bring us their bread dough at around 5 in the morning before going to work. We organized the work so that people would make reservations for their orders so that we would always have five or six bakes a day. If someone was not able to be there on time without losing a day’s work, we would have them bring in the flour, salt and yeast for my mother to make the dough. It took about two hours between each bake.

We were all kept busy with this work, from me on down to Concetta whose first duty was to put the wood in the oven but who later began to make the dough.

But even so this wasn’t enough to allow us to live in a dignified manner. The few “soldi” we earned were just enough to cover the necessities. However, we were growing and we also wanted to be able to buy some treats. Therefore, I and my oldest brother would hire ourselves out as “day laborers” after completing our “visits” to gather wood in the forest. It was made our lives even more difficult, but our mother would never ask us for the money we earned. Therefore we were able to buy cigarettes and, above all, on Saturday evenings we were able to go play cards at the cantina with the adults. How important we felt when we could pull money out of our pockets to pay for things. The satisfaction we felt erased all of the fatigue of the week.

There is one thing I will never forget, the difficulties that rich patrons gave us at the bakery. “The bread is not baked well enough.” “The loaves are too big.” This was all an excuse to haggle over the price, which was already miserably low. Sometimes they demanded that we deliver the bread to their homes. My mother often conceded (to our great disappointment) so as not to lose customers.

I remember all the pleading we would have to do, my brother and I, with the delivery packages on our shoulders while we delivered them to their homes. Conversely, “day workers” such as us were always courteous and often saying thanks. They would never forget to leave some pizza for the “guaglioni” ( dialect for “boys”), in their way a form of recognition for our services; which is why I am convinced that being well-off generates arrogance.

Now everything has changed, but I have forgotten nothing. So many people asked us to bake bread for them on credit! Poor people, who was more able than us to commiserate with them. These same people today are so arrogant.  They nevert look back. They are really  the “lice in the flour.”

How many of these boys may find themselves in difficult straits, these children of wealth, who  lack moral values and are set, thanks to their parents, never to have to get used to eating “bitter bread.” How many of these will drown in the sands because in their lives they’ve only known roses and flowers, yet behind every rose sooner or later we must touch the thorns. 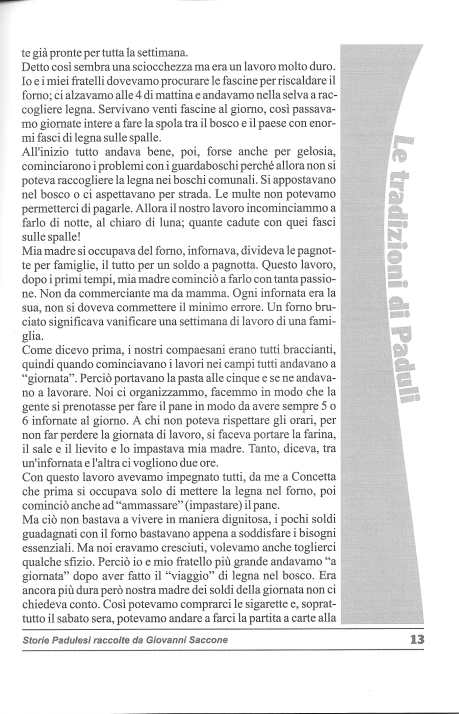 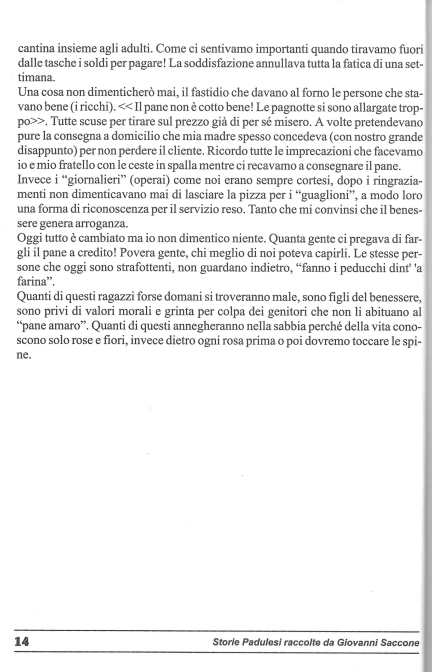 This entry was posted in Stories from Old Paduli.